Trager ® or Trager Psychophysical Integration (to give it its full name) is a gentle system of bodywork whose predominant goal is to make life easier, more comfortable, more pleasurable.  It helps you build up deep stores of energy and vitality and yet keeps you calm and centred.  In a typical session you receive several thousand light, rhythmical touches and come off the couch feeling like a child that’s been rocked in its mother’s arms. 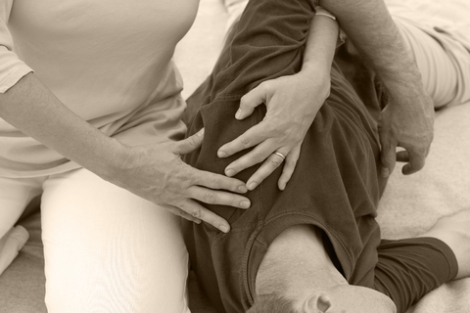 The history of this deeper-than-deep relaxation treatment started back in the 1930s.  Milton Trager was a young boxer and acrobat, living in Miami and training his super-athletic body.  He was always pushing himself to the limits, aiming to jump the highest, the farthest, the best.  Then one day he suddenly had a completely different thought.  “How can I land softer?” he pondered.  Then, “How could I land the softest?”  His whole philosophy changed overnight – from aiming for maximum effort he sought instead maximum effortlessness, how to become ever lighter and easier and softer and freer.   He discovered he could introduce the same feeling of ease and comfort to others by means of gentle rocking and stretching – it became his life work.

Over the next forty years he perfected Trager.  Keen to put his ideas on a firm scientific footing, he trained and qualified as a medical doctor.  However even throughout his training he was tending people and was given his own clinic where he treated those with polio and other neuro-muscular problems with near-miraculous results.

Basically Trager is a form of bodywork which involves gentle stretching, rocking, rolling, bouncing and “shimmering” – a swift but soft stroking movement over the body. “It’s extremely soothing for the central nervous system,” says practitioner Jill Dunley, “the rocking movements take people into a comfort zone, into a very deep state of relaxation.”

Nothing is forced with Trager, nothing hurts, nothing is remotely uncomfortable or embarrassing. “Rather than trying to go in and fix problems, we try to show the body how it could be more comfortable, more flexible, more easy,” says practitioner Agni Eckroyd, “it’s like talking to the mind within the body.”

Before a Trager session you will be asked a few questions about your general health. Then you will be asked to lie on a couch wearing whatever makes you feel comfortable.  Most people eventually end up in underwear but practitioners will happily work with you fully clothed. The first movements cradle your head and neck, gently rocking, stretching and flexing.  Within minutes you might find the vertebrae of your neck popping themselves into position quite naturally and painlessly.  The session generally floats by like a delicious dream.  Trager is very different from any other form of bodywork.  It does not use the oils or long strokes of aromatherapy; it does not press into the connective tissue as do Rolfing, Hellerwork or Looyenwork; it does not manipulate the skeletal system as do osteopathy and chiropractic.  But, although it is so very soft and gentle, it is not simply healing either.  “Trager is not a straight-on approach,” says Agni, “it’s a little like boxing.  You go round the side and air-box a little and then go in from a different angle.”  So, if an area is painful, the last thing a Trager practitioner would do would be to press or prod.  “If you encounter pain or tension you back off,” adds Jill, “you try another approach.”

Once you get off the couch, you are taught a few simple “exercises” or “Mentastics” as they are known.  Nothing arduous or remotely resembling physical jerks, these are simply little reminders of how to sit, stand and move with ease – a way of continuing your Trager session into everyday life.

Despite the “softly softly” approach, Trager has quite definite physiological effects.  It can ease pain and often help to eliminate headaches; it also promotes greater joint flexibility.  The reverberations of the rocking movements echo right through the body and actually massage the internal organs and deep muscles.  It can help digestion because it tones the abdominal muscles. Equally beneficial is the effect on the blood circulation, lymph drainage and on the respiratory system.   On an emotional level it battles against stress, eases insomnia and can help you cope with the strain of modern living.  Regulars users say it gives them a sense of ease and peace combined with a charge of energy and vitality.

There are few contraindications for Trager as it is so gentle but practitioners don’t work with fresh injuries or for three months after surgery; are very careful during pregnancy and would not suggest the treatment in cases of advanced arthritis.  However they can adapt the treatment for most conditions and can even work on people in wheelchairs.

Training is rigorous and all practitioners are checked every year before having their certificates renewed.

Sessions usually last an hour or an hour and a half – but if someone is very weak, shorter sessions of 45 minutes are recommended.  Acute problems can often be eased in one session but chronic complaints benefit from a series of sessions – ideally once a week for six weeks.

For more information on Trager and to find practitioners see:  www.trager.com

"You can't wake a person who is pretending to be asleep."